A beautiful night for watching the Milky Way turn slowly through the void of dark space. This remote spot on the far western coast of Australia near Denham was proving to be an ideal spot to shoot the night sky – especially when facing south towards the southern celestial pole.

Echoes in the Void 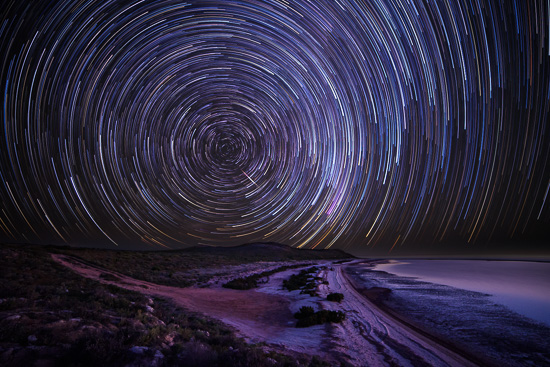 Earlier in the day I’d already recce’d the spot and worked out approximately where the southern pole (Sigma Octans) would lie in the sky so I knew this composition with the beach sweeping away into the distance, the ocean on the right and that rough track on the left would all work whilst allowing me to have a nice circular swirl of stars above the hills on the left. It was soo dark and quiet here – all I could hear was the soft wash of the waves on the beach below, standing alone in the universe…

Planning wise I’d used SkySafari and PhotoPills apps on my phone to work out exactly where things would be – the Night AR mode is awesome for this.

I’d already taken my foreground frames earlier in twilight and now that it was dark enough it was time to start my star trails shots.

It was soo dark here I was happy to shoot the frames for one minute at ISO 1600 and just before 7:30PM I started the intervalometer and went back to camp.

Two hours later I came back to the camera and stopped the shots. I had 120 frames in the can and hopefully they’d work for me. The result after stacking and blending in the foreground frame is above and I was really happy with the result – one of my best so far I think. That little perfectly placed meteor – a bonus I left in the final result :).

After the trails had finished I switched to a vertical composition and took some frames looking down the beach again with this new composition with the beautiful Milky Way streaking up through the void of the the universe above.

Slashing through the Void 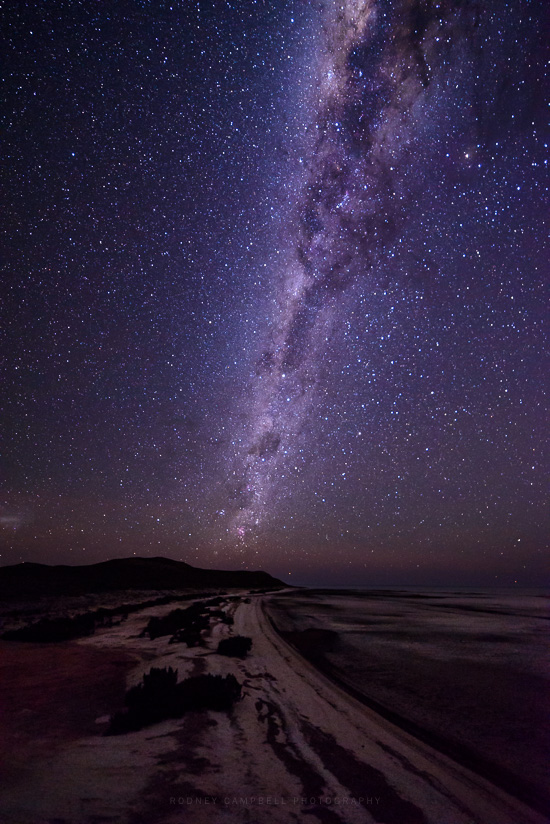 It was just before 10PM when I packed up and headed back to camp and to bed. Looking back I wish I’d done a vertical star trails as well but waiting another two hours probably wasn’t a great idea with a busy day ahead. Still it’s these once in a lifetime locations… sigh…