I was walking along George St in the city (Sydney) around lunchtime when I saw these two ladies wearing brightly coloured summer dresses waiting at the intersection to cross amidst a sea of drab whites, blacks and greys (mostly people wearing business clothes). As we were crossing I got a lovely flick of the hair and here we are.

I used the local adjustment brush in Adobe Lightroom to post process the image as you see it here – I firstly used a large hard brush over the whole image to reduced the Saturation, Clarity and Sharpness all to -100 and I then used the Erase brush with Auto Mask to “paint” the two women back in and then touched up the edges a little. 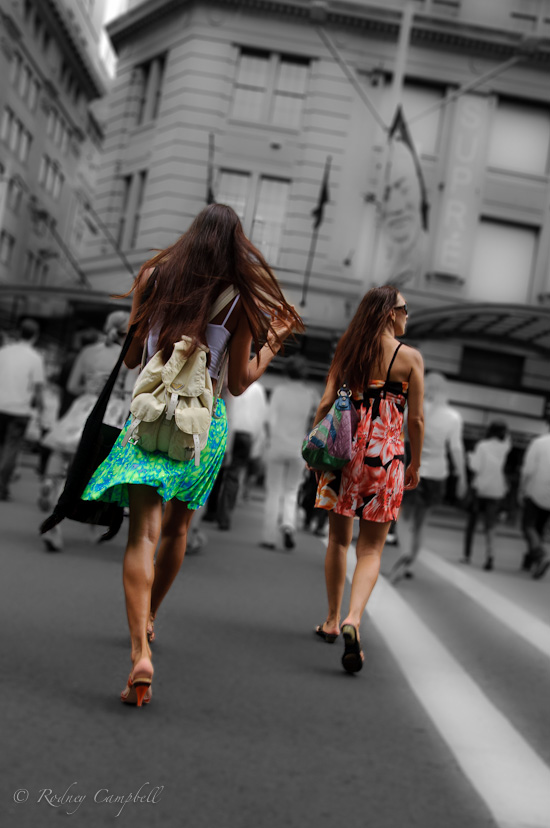 Another street image (on George St outside the QVB).

Besides the conversion to monochrome in post processing for this image I’ve also used the local adjustment brush in Adobe Lightroom to selectively reduce the Clarity and Sharpness to effectively blur the background of the image. 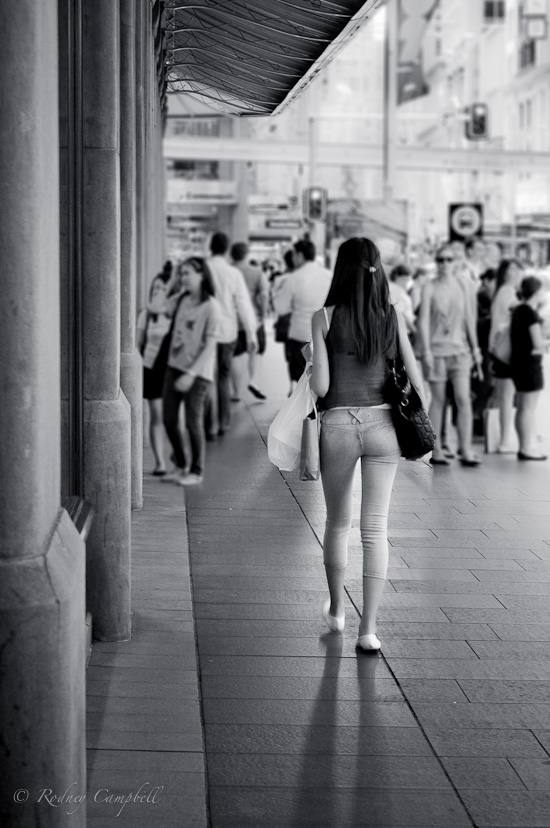 My daughters school recently held their swimming carnival and I went along to assist and take photos for the parents and school.

Here’s one of my daughter at the starting blocks: 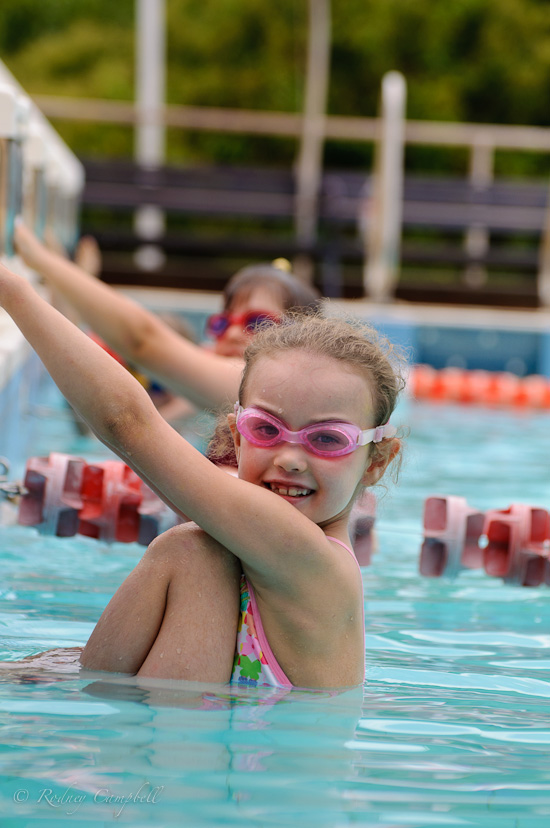 I met up with a few other keen photographers for a sunrise shoot at Mahon’s Pool at Maroubra Beach in Sydney’s eastern suburbs. We arrived around 5:45AM to prepare for the expected 6:30AM sunrise. Unfortunately the sky was very heavy with clouds and as it turned out no spectacular sunrise – in fact no sunrise to speak of at all 🙁

We did however get the chance to take some long exposures which produces smooth, milky, misty water.

Note: These images (especially the wider shots) look much better when larger – so click any of the images below to see larger versions in an inline overlay gallery viewer. 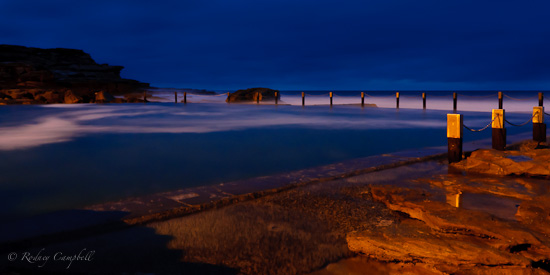 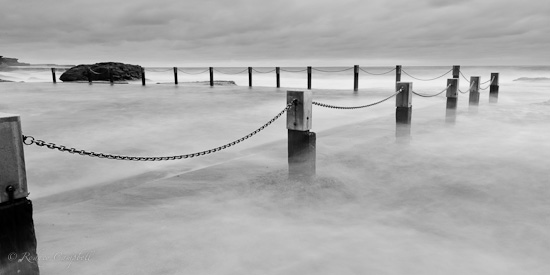 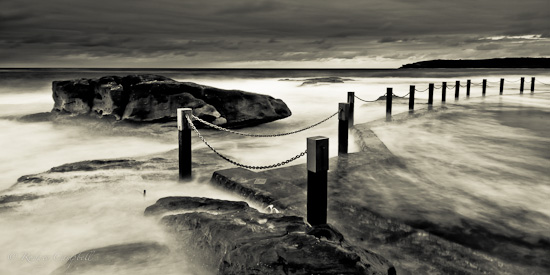 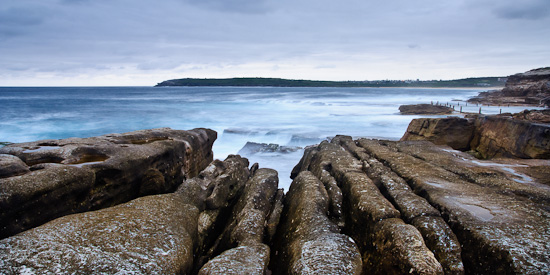 I recently purchased a B+W ND 3.0 (1000x) 10-Stop Neutral Density filter in 77mm format – this thing basically looks like a piece of black glass in a filter ring :). I purchased mine online from Maxsaver.net however you should be able to find B+W filters at any good photography specialist.

The goal of an ND filter is to reduce the amount of light coming through the lens into the camera. Typically this might be for one of two main reasons: To enable the use of larger apertures (for a smaller depth of field) where a bright condition would normally not allow this (without over exposure). Alternatively to reduce/lengthen the shutter speed for creative blur effects with moving subjects or in fact masking them out entirely (e.g. moving people in a scene). Ideally it will reduce and/or modify the intensity of all wavelengths or colors of light equally, giving no changes in hue of color rendition.

I was out doing a sunrise shoot with some friends on the weekend so at the end after the sun had risen (as it turns out we had no actual glorious sunrise – we had totally cloud filled skies so it just got gradually lighter 🙁 ) I tried the filter out and the following are my first shots using it – I didn’t actually take my own advice above (except for using the tripod) and I ended up almost guessing a suitable shutter speed and aperture combination and I let AutoWB (and adjusted the RAW in post) and auto focus do it’s thing (infinity probably).

The following shot was taken essentially pointing into the sunrise and on top of the ND3.0 I also used a “hand grad” to reduce the brightness of the sky (sort of a makeshift graduated neutral density filter) – basically I put my hand in front of the lens (covering the top half of the image (the sky)) and then moved it up and down to expose the sky less during the 20 second exposure. The main effect we get here is turning the ocean into a misty blur by the use of a very long shutter speed. 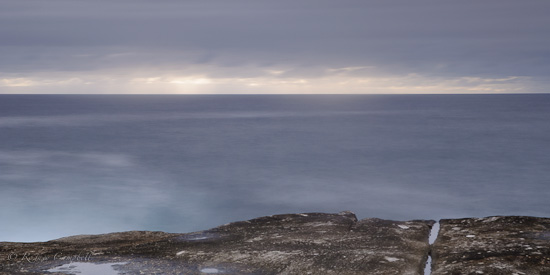 This second image also results in that milky moving water even though it is quite light after sunrise (8AM) – I’ve also converted and processed the image as monochrome. 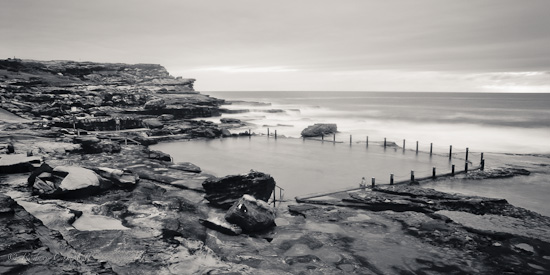 Once I get a better chance to test out the filter I’ll post up some hopefully more interesting examples.