As I was still getting up very early each morning (time zone silliness :)) I decided to head up to Central Park to check it out for sunrise

After a brisk walk in the freezing cold an hour and a half before sunrise I reached 5th avenue and headed into the park. At this end of the park there is a huge reservoir (the Jacqueline Kennedy Onassis Reservoir) which spans almost the entire width of the park so my plan was to head around to the western side and shoot towards sunrise over the water

Officially named the Jacqueline Kennedy Onassis Reservoir in 1994, the Reservoir is famed for the 1.58 track that encircles the 106-acre body of water. It covers approximately 1/8th of the Park and holds over a billion gallons of water. When the Reservoir was built in 1862, its original purpose was to provide clean water for the city. While this function is not carried out today, the Reservoir does distribute water to other Central Park locations, such as the Pool, the Loch, and the Harlem Meer

I was a little concerned about walking around in Central Park at 4:45AM but perhaps unsurprisingly there were already a small number of people about – mostly joggers and walkers circling the reservoir

Initially I found myself a nice spot along the fence around the reservoir and looked to do a pre dawn cityscape over the water – this long exposure panorama (each frame is nearly 2 minutes long) is the result of stitching nine (9) vertical frames looking sort of south west over the water from the north east corner of the reservoir. 5th avenue is on the left with midtown manhattan in the left third and the upper west side on the right – still over an hour till sunrise 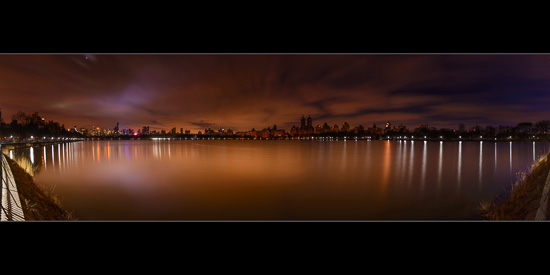 I then moved around to the northern end of the reservoir and shot another pre dawn LE pano looking straight down towards midtown with a longer focal length (60mm) to show more of the cityscape skyline. This one ten (10) frames stitched with the pre dawn colour. As this started over half an hour before sunrise and ended 15 minutes later the light changed quite dramatically over this time so I had to manually adjust the exposures on the way through and it was still a pain to manual adjust in post to allow it to stitch