After my wildly successful first attempt at Star Trails out in the country on a clear star filled night it was time to up the ante and attempt one in the heart of the city.

Kath and I headed down to Balls Head Reserve on the northern side of Sydney Harbour where you can get a good view across the harbour with the Sydney Harbour bridge and Opera House on the left, Sydney’s CBD skyline in the middle and Darling Harbour across to the Anzac bridge to the right. The evening wasn’t looking promising from the start with the sky filled with light stringy clouds and the haze from burn off which were likely to reflect the light back down from the city (which they did). So at least it looked promising that we’d be doing nice colourful sunset shots instead (which as it happens also conspired not to happen with a pretty uneventful sunset).

We setup for the star trails anyway and a quick check of the iPad astronomy app showed Sigma Octanis (the centre of the star rotation) to be somewhere just to the right of Darling Harbour for us. We took a number of twilight images to use as the base for the city and water in our final image (I used a 3 stop hard grad ND over the sky for these).

We then switched to star trails mode and reversed the grads in an attempt to block out the light from the lower half of the image (basically from the top of the buildings down) – I stacked both my 2 and 3 stop hard grads for this. It was then a bit of trial and error to get an exposure for the star trails shots and this is when the problems really began…

In the country I used 60 second exposures at f/4 and ISO 1250. In the city I tried 30 second exposures at f/4 and ISO 1600 which resulted in a nuclear wasteland – basically the entire sky was just pure white. I tried a number of exposures but everything resulted in washed out sky – even my final selection of 25 seconds at f/4 and ISO 800 was looking very very grim on the LCD – any shorter and I was not going to capture any motion of the stars and any lower ISO and I might not register any stars at all. Those damn clouds and crap in the sky (and the 8:30PM fireworks display at Darling Harbour probably didn’t help :)) were just reflecting the city light back at us and blocking out the stars.

We were there anyway so we decided to just give it a try and set the intervalometers off on their task. I setup for 399 shots (almost three hours worth) from 6:10PM and even the shots at the end looked disastrous.

Luckily we’d both also brought second camera bodies and Kath had brought the full light painting arsenal so we spent the next three to four hours experimenting with light painting in the grassed area next to where we’d setup for trails whilst we were waiting for them to complete. Will post some of those in a follow up thread when done. 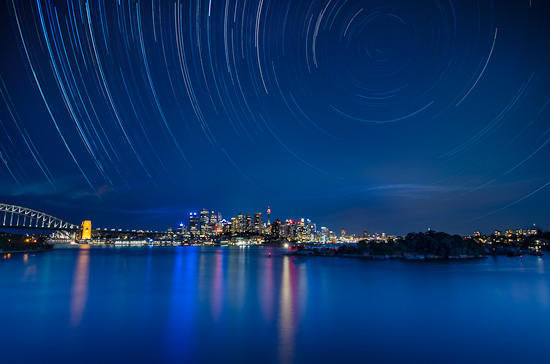