Staircase to the Moon is a natural phenomenon which occurs when a full moon rises over the exposed mudflats at extremely low tide and creates a beautiful optical illusion of stairs reaching to the moon. For 2 to 3 days a month between March and October each year, when conditions are just right, visitors to the North West region are treated to the natural spectacle.

Staircase to the Moon

It occurs along the coastline at Onslow, Dampier, Cossack, Point Samson Peninsula, Hearson Cove, Port Hedland and Broome. They say however it is best seen from Roebuck Bay in Broome. It is a natural attraction and its visibility varies in strength depending on weather, sunset, moonrise and the tide.

As luck would have it the even was occurring on our last evening in Broome so we headed to Town Beach to view the spectacle.

We checked out the local markets first and then headed out to stake our spot before the moon rose.

There is a large finger of land – a long breakwall which had been built out into the bay and we headed there first. It was very crowded but once we got out right at the end and onto the rocks we had a few good spots we could shoot from. There were a number of other photographers already setup here with their tripods.

Whilst waiting I was doing some research on TPE on my phone and based on those results I wanted to shift position to the next point of land south of where we were (at the other end of this little beach). We had time and there were a few reasons I thought that location would be better.

– the shot from here would have a distant headland in the shot (not just a clean horizon).
– I could also see that I’d have much more of the mud flats from that shooting position out to the horizon.
– lastly another upside was that there were no people over there at all unlike the current packed location :).

My daughter was very good, allowing me to drag her all over the place just to get in the “right” position to take photos. She knows me too well 🙂

Fifteen minutes later we eventually arrived at the new spot. It required a little careful navigation over the mud and through some shallow water, skirting the edge of the mangroves. I set us up on the largest, highest rock we could find in this little area, making a nice padded spot for my daughter to sit. I setup the tripod and camera for the start of the show.

We still had to wait about 30 minutes (6:34PM) till the moon started to rise. It rose very fast and by 6:39PM the best of the conditions were well over as the moon rose further and got progressively higher, brighter and whiter. Five minutes later we packed up and started making our way back to the beach. The water had risen slightly and it was now dark so it was an interesting trip back to the beach. I’d forgotten to bring a torch so thankfully I had my phone to light the way.

Staircase to the Moon II 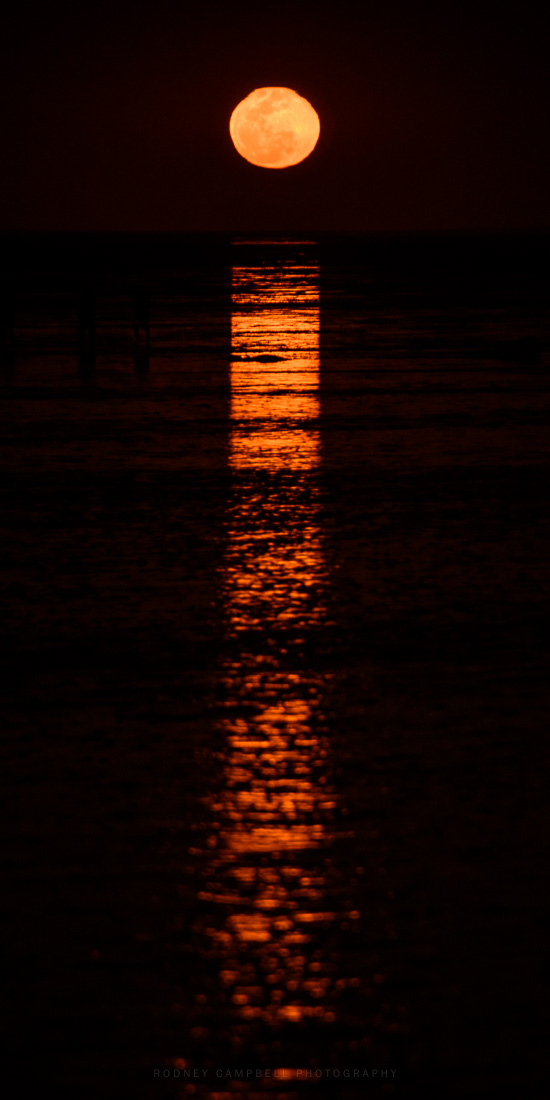