Having stayed up late for many nights and after a busy full day the previous day I really was’t planning on getting up early… Let alone head out for a sunrise shoot on Griffiths Island.

I had planned to go out to the Lighthouse On Griffiths Island at some stage (either sunrise or sunset) during my stay in Port Fairy. The promitory of land on Griffiths Island where the lighthouse resides sticks out as the easternmost point of land so technically both sunrise and sunset would probably work here. 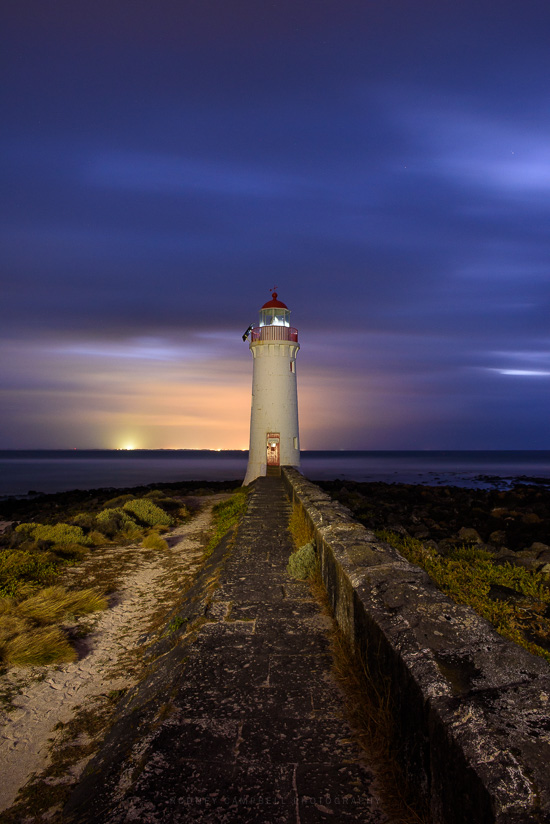 PhotoPills had indicated a couple potential scenarios including some milky way and star trails if the weather would be kind at night. However sunrise looked like it would be the most likely candidate with somewhat stable and dry land at your feet :).

So I got up, got dressed, got the gear ready and headed out. I had mentioned at the information centre in town the previous day about walking out to the lighthouse to take photos and they had indicated it would take around an hour.

How very wrong they were :)… They had obviously not factored in a sunrise photographer in the total darkness keen to get on location. Sunrise was at 6:23AM and I usually like to be on site about an hour beforehand (the start of astronomical twilight). I was over thirty minutes too early and was taking first test shots before 5AM :).

The image up top was a natural four minute long exposure (at ISO 800 :)) taken at 5:17AM. Of course with a little light painting of the black foreground and the lighthouse silhouette :). That ball of light on the horizon is not the sun (which is way over the horizon off to the right). They would I expect be the lights of Warrnambool in the distance.

Having shot the classic composition looking straight down the path eastward facing the lighthouse (and a horrendous long exposure panorama attempt :)) I decided to investigate elsewhere.

The below may not look like it but this is a three frame stitched long exposure panorama which I’ve then cropped square :). The source frames were taken just before 6AM (so almost thirty minutes before sunrise). You can see the cool funkilicious black boulders which fill the foreground and much of the area around the lighthouse. 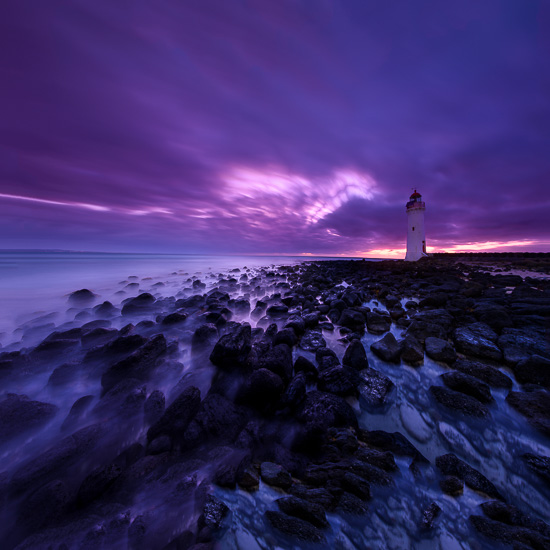 Here a more traditional single frame landscape composition from a nearby position. As I was using a 3 stop reverse grad filter for this to hold down the sky I took two frames – one with the filter and one without so I could manually blend back in the darkened lighthouse into the final frame. 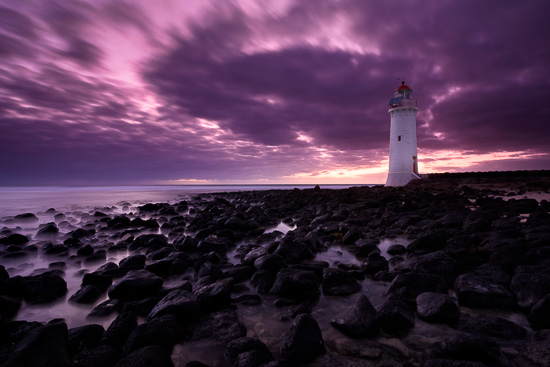