At Waverley Cemetery with good friend Gerry for an evening of star trails. A pretty good night for it with no moon and very little cloud.

First of all we found this spectacular marble structure with no competitive elements behind or around it which was ideally situated for the type of shot we wanted.

We started as usual by setting up and getting our composition right before doing some light painting of the foreground (which we’d later use to blend into the final shot with the stacked star trails images). 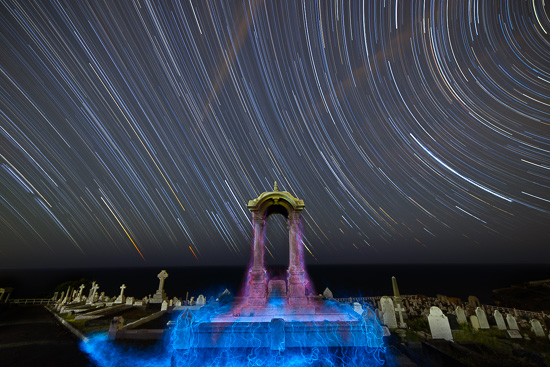 This is a massive cemetery right on the ocean cliffs at Clovelly in Sydney’s eastern suburbs so a ghostly feel was the order of the day.

We tried a number of EL wire based images for that ghostly fire type look along with some different coloured torch light on the various elements in the cemetery. Even tried a few with strong backlight firing the flash from behind and below the structure.

Just over an hour or so later we’d had enough and decided to start our star trails sequence at 9:20PM.

Using a new lens which allowed me to shoot with a wider aperture than my 16-35/4 I was able to drop the ISO a little and shoot this time at 60 seconds @ f/3.5 and ISO 500 for the individual frames.

We decided on about two (2) hours worth of shots and let the intervalometer run… it was pizza time.

Unlike our recent trip to Malabar we’d chosen a much better location this time with the car parked just a few hundred metres away and Clovelly nearby we ordered pizza (strangely we didn’t bother asking for delivery to the middle of a cemetery – go figure! :)). I drove over and picked up our order and was back in short time and we were enjoying a well earned meal.

The real upside of the pizza is not so much the food (and to be honest it was actually quite good, the garlic bread was ordinary but the pizzas were very good) – it’s the fact that this whole exercise basically chews up an hour of the waiting 🙂

You know what the biggest pain of shooting star trails in Sydney facing east over the ocean is – not the light pollution – it’s having to manually clone out the plane trails from hundreds of individual images. Once the curfew kicked in at 11PM however things were good (unfortunately 1hr and 40mins were before the curfew).